Cooking for one outdoors can be satisfying. There is enough space on the grill, no rush and lovely as it always is to have guests I don’t have to keep stopping to attend to something else. The kitchen does get quite messy though – perhaps BBQ for two is ideal, with one person devoting themselves to cleaning off surfaces and making the salads.

With the very last summer evening upon us it seemed a good idea to make fajitas:

Take off the vegetables as they are done, finally moving the chicken over to the hot side for a bit until it looks cooked, then remove and rest.

Now put some rice on to boil. If you haven’t done so already, start mixing up some tortilla dough – I used half plain flour and half atta flour with a spoonful of oil and a pinch of cumin, salt and pepper. After kneading, leave to rest.

To make the pico de gallo, finely dice the fresh tomato with a few slices of bell pepper, half an onion, a chili, the remains of the courgette, some coriander leaves and some roast garlic. Then stir it all together with some salt, pepper and lemon or lime juice and leave for the flavours to combine.

For the guacamole: slice a ripe avocado and marinade the slices for a few minutes with equal parts of lemon juice and olive oil. Then take out the slices and mash with a spoonful or two of pico de gallo. Garnish with sour cream or yoghurt.

A few lettuce leaves dressed with the avocado marinade can freshen up the whole assembly too.

When you are ready to eat, slice the chicken into medium slices. If there is any sign of being undercooked, stir them around in a hot wok before continuing. Then layer the wok with chicken, spring onions, slices of grilled peppers and chili, and the strips of courgette. (If the chicken strips seem dry, layer slices of cooked tomato around them) Stir in some coriander leaves and return the wok to the barbecue – I put it directly on the grey coals. When it is audibly sizzling take it off.

Quickly roll out and cook a few tortillas. I did this on the barbecue after the wokking had finished. Just can’t bear to waste the coals. But you might find, as I did, that the fire suddenly loses heat. In that case just finish them on a hotplate.

Hard as it is, try to serve when the meat is hot, the tortillas warm and the salads cold. A beer is always good, too. 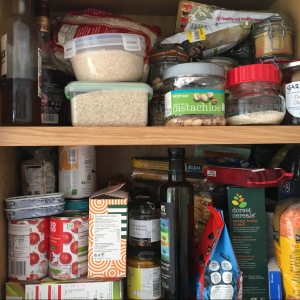